A lot of growing tips and hints around the internet, here is just our personal report, hoping it will harvest our personal cannabis use to get us trough the winter :-)

Six tips that will dramatically improve your yield clic here

Start with seeds from a recommanded seedbank, there is a lot of choice, search for those who fit your taste and look if the strain is easy to grow in your country/growing room, we prefair the easy grow for beginners and took the Hindu Kush Feminised from sensiseeds. (Take a look and give comments if you like below, thanks!)

We bought 5 feminised hindu kush seeds, and put them for 48 hours in a glass off water.

2 days later, planted them in a balcony tray, waiting they grow a bit before seperate them.

That' s strange, one off them must have took a cold during the last days of bad weather, like they all have the same treatment, wich is for the moment just a bit of water every 2 or three days.

Well, one week later the small sick one at the right has dressed up his leaves again and still alive!

Hope to find the time to split the three big ones and plant them in their final buckets.

Well, i had an email of a friend who is following this cannabis growing page, and told me it is not a beattle at all. Still no idea if it is a carnivor or if he likes cannabis too, than i have a problem....Looks like the transplantation of the 5 cannabis plants went good! The three big ones i planted in 10 liter buckets, the 2 small plants i put together in a smaller pot.

28/5/19  Wow 120 km/hour wind! try to load up the video about my cannabis plants, hope they will still be alive tomorrow!

Small damage on the leaves after those storms, but looking good now, the two smaller ones have their one pots now too, so very happy, just need more sun right now!

(Those three smaller pots, are some strangers, found in the weed bought on the street, no idea what that will be, i think think that i will plant those in the forest, do some "guerilla growing"! ;-)

Update about those Hindu Kush plants on my balcony. Some say, "don't touch them, let them grow", but i cutted all first leaves, who became yellow and dry, i think also gonna cut later on the next serie off branches so she can put all her energie in the the top of the plant. Also they are looking more beautifful after their cut, maybe i confirm with Bonzai growing?! LOL What do you think? Amazing though, how different the seedlings develope, even grown in same serconstances?! What do you think? 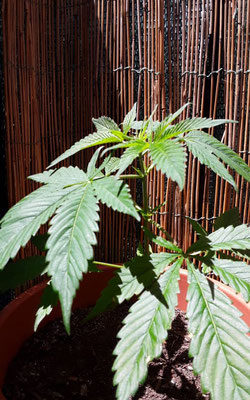 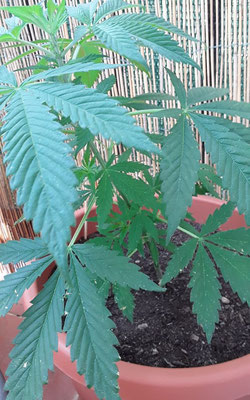 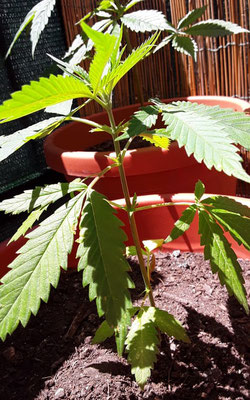 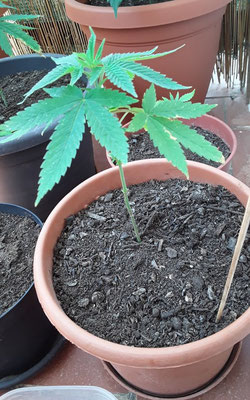 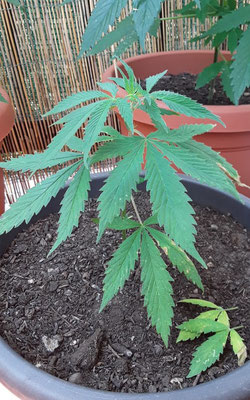 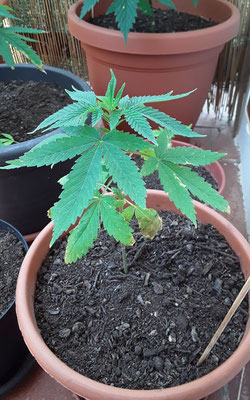 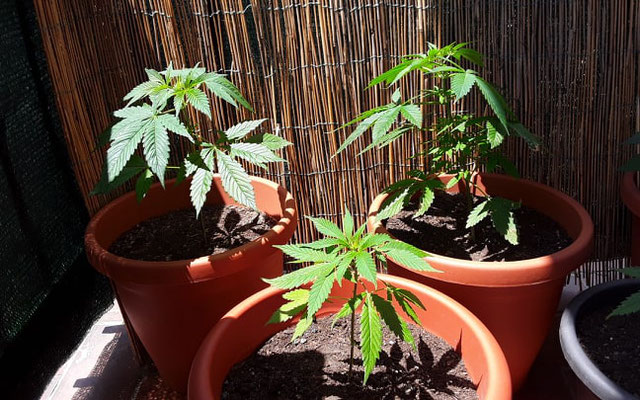 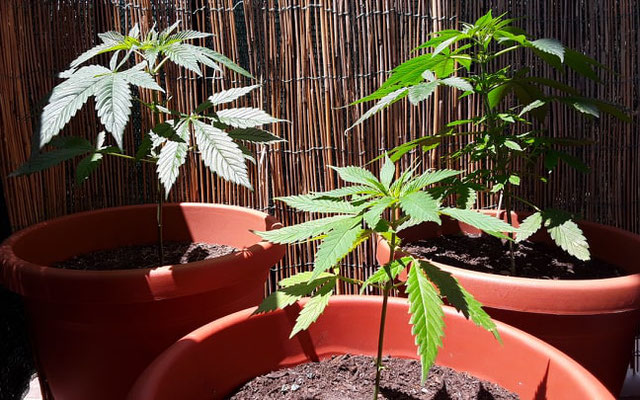 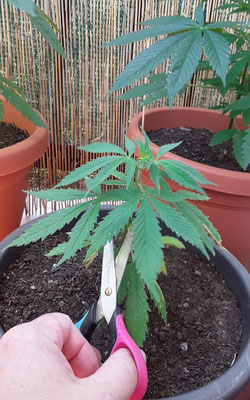 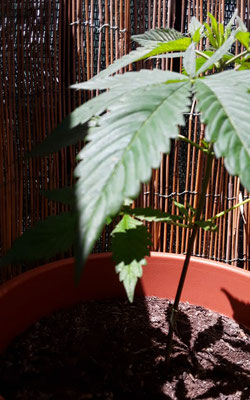 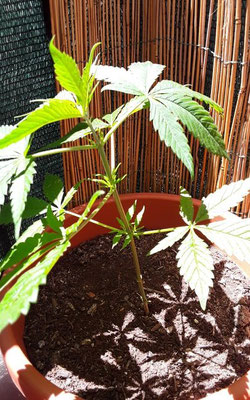 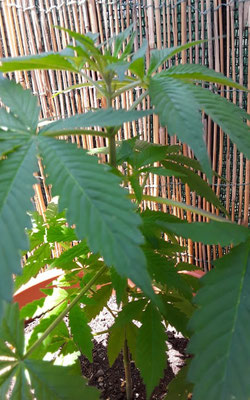 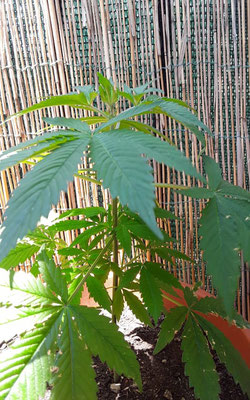 Somewhere in July i took off the mean branches in the middle, so the plant can put now al her energie in the lower branches, so there will be more heads.(no idea how it's called in English, in dutch is called a top and french tête)

In this way we get the most out of our space, without putting more plants. 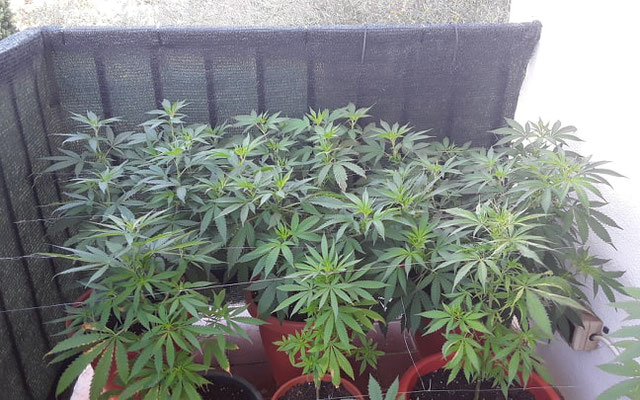 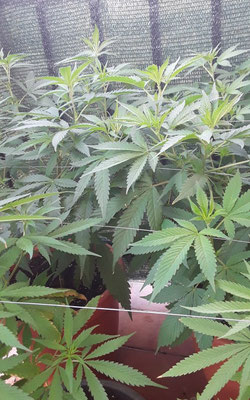 Finaly the first signs of flowering! Those 2 tiny white dreads popping out, great! As you can see i cut the lower branches, i don't want small buds....Hope she put all their energie in the upper branches now to make some big buds in top! Wind is still terrible at 90km an hour, have to feed them water twice a day, like it is also 35 degree...So next time, much bigger pot or container! These pots are too small allready when you look at the surface of the plant...Next experiment i will buy a cement bugget, or what ever it's called.... 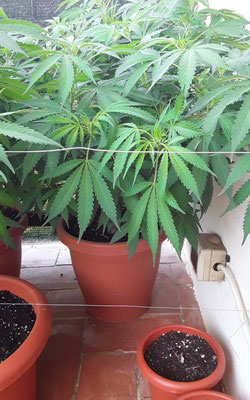 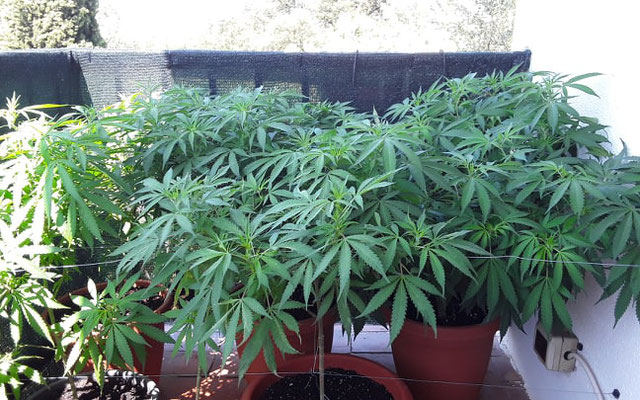 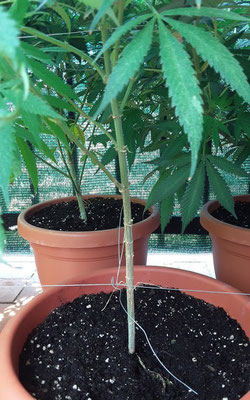 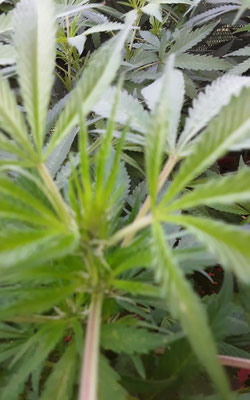 The iron wiring it's not a good idea after all, with the extreme wind here in northern spain at the coast (tramantana), the branches and leaves cut off. Next time i use the plastic horticulture wiring!

Cannabis Coffee Shops near me by City:

Coffee shops near the borders with Belguim and Germany do not aloud tourists. You have to be a dutch citizen or you have to work in the Netherlands to get in and buy your cannabis.

So if you temporarely work or study, get a proof at the city counsel and ask for a GBA-Uitreksel.